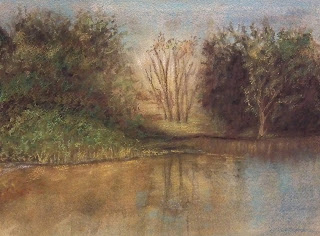 I live in a pretty town. In the center of town are two lakes with walking paths that go around the lakes. Its the focus of our town. And at the south end of the lakes is a waterfall. There used to be a bench right near the waterfall that was MY bench. Years prior I had mentioned to the then Mayor of Monroe that I would love a bench near the waterfall. And low and behold, what appeared the following month, but a bench right where I had asked!  That's why I considered it my bench. I believe it was removed when hurricane Irene hit - that hurricane really made a mess of our town. So no more bench...and I don't know the current mayor...ah well...this is the view one saw while sitting on the bench when you looked to the left. I remember watching turtles sunning on an occasional log that would float into this little spot. And bull frogs, with such a loud call, it was hard to believe it was really a frog.  Now that the bench is gone, I don't sit there anymore. I miss my bench.
Posted by Elizabeth Parsons at 3:12 PM

All images are under copy right. Please respect copy rights of all artists. Please ask permission before you download.