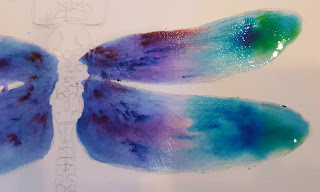 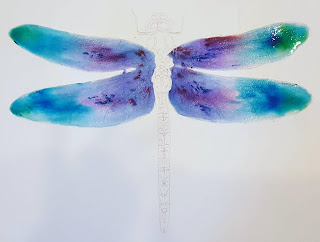 I've had Brusho crystals for awhile and recently started using them in a new way. I was watching a YouTube video and had an "a ha" moment. Prior to this video, I would sprinkle the Brusho onto wet paper willy nilly and was left with a colorful mess. Nice for backgrounds, but not much else. But the video explained that if I were to either sprinkle the crystals onto dry paper and then paint with a water filled brush...control! Or, make my drawing, wet the area to be colored and then sprinkle in the crystals....again...control! A whole new technique has opened up for me. This is a large painting. The dragonfly in on Arches 140 cold press paper that measures 12" x 16".

I am also using another new product as part of this experiment. Daniel Smith's iridescent neutral watercolor. After this was all dry, I painted over it with the neutral iridescent and it SPARKLES, like a wing would do. Amazing. It is subtle and only sparkles in sunlight.

I am having great fun experimenting and playing with my watercolors. I will post more as this evolves.  Happy Painting!

Posted by Elizabeth Parsons at 6:46 AM

All images are under copy right. Please respect copy rights of all artists. Please ask permission before you download.